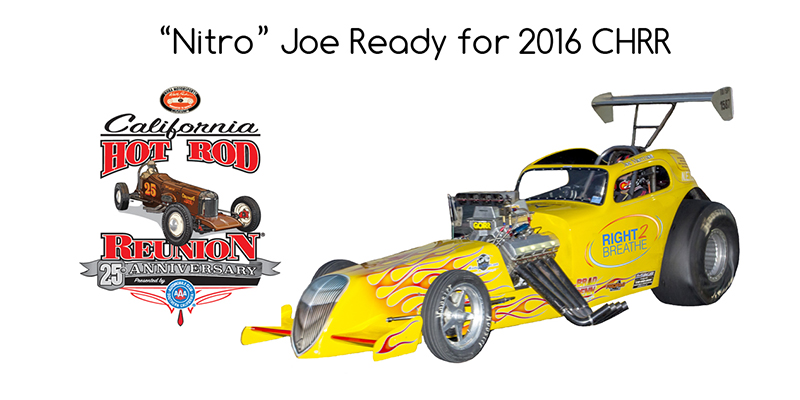 Flemington, NJ. – Ted Brine’s Iconic 134 Fuel Coupe is back. The 1934 five window Ford nitro-burning coupe has been rebuilt after a horrible accident at last year’s California Hot Rod Reunion and driver Joe Morrison is anxious to get back in the saddle in the Fuel Altered category during the Silver Anniversary edition of the NHRA California Hot Rod Reunion. Morrison will also complete in the ultra-competitive NE1 category with his Novartis® and Sunovion® backed 1948 Fiat Topolino Right2Breathe™ Nostalgia Altered.

Morrison, from Flemington, NJ has fond memories of legendary Auto Club Famoso Raceway and some he’d like to forget. In 2014, he successfully upgraded his NHRA competition license to the Top Alcohol Dragster category driving Jerry Darien’s A/Fuel Dragster, recording a career best 5.37 elapsed time at a tick just under 270 mph. However, at last year’s CHRR, Morrison was piloting Ted Brine’s 134 Fuel Coupe when the car made a hard turn towards the center line, and snapped back to impact the guard rail head on. The car flipped over on its side and slid down the all-concrete quarter mile drag strip until Morrison deployed the parachutes, flopping the damaged 34 Fuel Coupe back onto its wheels.

Although Morrison was uninjured in the incident, it left the veteran driver itching to return to the 2016 California Hot Rod Reunion for some redemption. Thanks to the financial backing of Pharmaceutical companies Novartis® and Sunovoin®, along with medical industry leaders NDD Medical, Pack Health and Drive-Devilbiss Healthcare, Morrison has the opportunity to double his pleasure and double his fun.

“I remember every detail about that run in Ted’s 134 Fuel Coupe and those are memories I’m bound and determined to never relive,” stated Morrison, who serves as the Chief Executive Officer and co-founder of Right2Breathe™, a non-profit organization that provides Education, Awareness and Free Screenings for respiratory medical diseases including Chronic Obstructive Pulmonary Disease (COPD), Asthma and Allergies and other respiratory illnesses. “Big Daddy Don Garlits said it best, ‘It’s not a question of whether you will have an accident in drag racing; but when it will occur’. Hopefully I’ve gotten mine under my belt and we can put on a great show for the estimated 50,000 California Hot Rod Reunion fans that will be on-site for the 25th anniversary of this outstanding event.”

While his anticipation to return to Auto Club Famoso Raceway was primarily motivated by competing at the event, Morrison also received notification recently that his Right2Breate Project collected a much needed financial boost from Novartis®, Sunovion®, NDD Medical, Pack Health, and Drive-Devilbiss Healthcare to host their first NHRA COPD Screening event during the same weekend. Respiratory therapists and other medical professionals will be on-site at a display in the manufacturer’s midway at Auto Club Famoso Speedway to provide FREE COPD Screenings and spirometry exams, designed to measure lung function and guide patients towards receiving a COPD diagnosis from their primary care physician or to know their lungs are in great shape.

The Right2Breathe™ Project was co-founded in July 2014 by Joe Morrison and Tim Charlet; two second-generation Drag Racers who have personal experience as caregivers for family members with pulmonary disease including COPD. The Right2Breathe™ Project is targeted to a passionate fan-base of over 50 million individuals in the United States; who share a common passion for motorsports and automotive industry as the organizational co-founders that due to their vocation or lifestyle choices are at high-risk for developing respiratory medical conditions.

“COPD rings home for me and is the core inspiration for Right2Breathe™,” stated Joe Morrison, CEO of Right2Breathe™. “My father was a plumber for several years who raised me in the sport of NHRA Drag Racing. Together we’ve had an active role in New Jersey supporting COPD education, screening and awareness for the past four years. Although he recently passed away due to complications from COPD, my dad’s inspiration strengthens our resolve. With this year’s NHRA CHRR COPD Screening event, we are expanding our reach to our target demographic. Thanks to the support of Novartis® and Sunovion® and the fellow network partners we hope to educate the extensive motorsports fan base about the dangers of COPD and provide them with tools and resources to reduce their risk potential.”