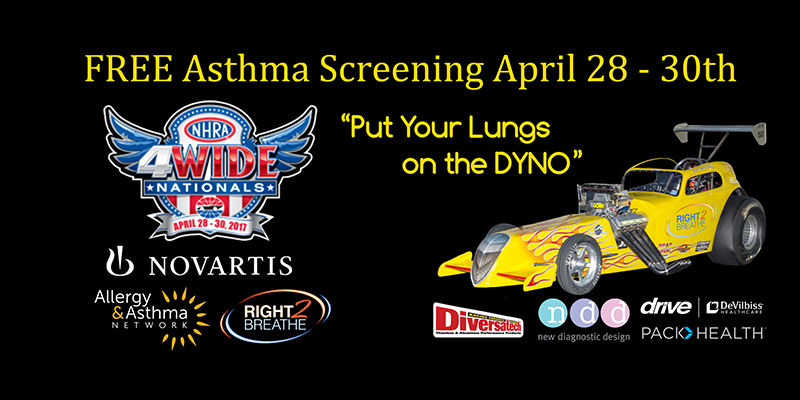 The Right2Breathe® Free Asthma Screening program; which was funded by a grant provided by Novartis®, was the non-profit’s first to be held at a NHRA National Event. Right2Breathe® rolled out their screening program in October 2016 at the NHRA California Hot Rod Reunion – which was focused on Chronic Obstructive Pulmonary Disease (COPD). At that event, Right2Breathe® completed hundreds of surveys and spirometry exams and engaged with roughly 35,000 people; many of whom had already been diagnosed with COPD.

The screening program for COPD, Asthma or any other respiratory disease itself is a two phased process, which includes asking people to complete a five question (for COPD) & 14 question (for Asthma – developed by the American College of Allergy, Asthma and Immunology) survey. Based on the results of the survey, people are then invited to complete a free spirometry exam, a non-invasive breathing test designed to measure lung function. During this screening event, Right2Breathe also posted online survey’s throughout their social media pages, so fans not attending the event could still learn more about respiratory health.

During the three-day race weekend, Right2Breathe®’s teams of Respiratory Therapists and RT student volunteers completed more than 450 screenings for Asthma, using EasyOne® Plus spirometry equipment provided by ndd Medical Technologies; which significantly eclipsed the total amount of free spirometry exams completed in Bakersfield. Initial results of the 14-question ACAAI survey discovered that of all those who answered all 14 questions (both onsite and online), nearly 40 percent answered “YES” to 7 out of 14 questions. Of the spirometry exams that were completed in Charlotte, roughly 25 percent indicated lung efficiency numbers that indicate a patient is a higher risk of being diagnosed with a respiratory disease.

Right2Breathe® co-founders Joe Morrison and Tim Charlet; second-generation drag racers themselves, found the event incredibly motivating, engaging with fellow racing fans, drivers and crew members and inviting them to “Put their Lungs on the Dyno” during the sensory overload that is the NHRA Four-Wide Nationals.

“It was an honor to meet and engage with so many people who had questions about Allergies, Asthma, COPD and other respiratory diseases at the NHRA Four-Wide Nationals,” stated Tim Charlet, the Chief Marketing Officer of Right2Breathe®. The diversity of the people we screened and spoke to about respiratory diseases was impressive, ranging from children to senior citizens, men and women of multiple races and from different geographic areas. We knew that our target demographic was at higher risk of eventually being diagnosed with COPD, Asthma and other respiratory disease, which is why Joe and I started Right2Breathe® in the first place. We also were very happy knowing that several of those that had lower lung function numbers have already visited their primary care physicians and many already being referred to a pulmonologist.”

“Tim and I are very appreciative of the assistance of Novartis®, ndd Medical Technologies and Allergy & Asthma Network for helping us host this very important event,” remarked Right2Breathe® CEO Joe Morrison. “Having the opportunity to meet so many fellow racers, fans and crew members with similar stories of living with COPD and Asthma as ours was inspiring. There is a need out here in the automotive world for the service we provide; and we’re very thankful that our partners recognize it and desire to be part of a solution.”